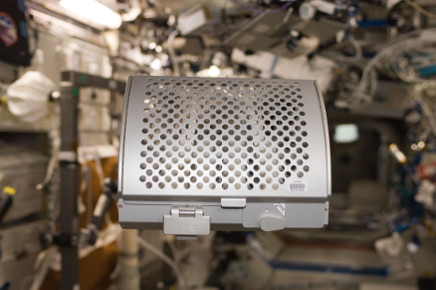 Danish Aerospace Company (DAC) was involved in the building of the Minus Eighty degrees Freezers for the International Space Station called MELFI. DAC was responsible for the design, development and manufacturing of the internal outfitting for all the freezers. This included both the cold parts of the internal support structure for the Trays, the Trays themselves, all types of Box Modules, and Vial Cards and Bags for storing the samples in.

DAC designed, manufactured and pre-assembled the internal cross structures of the Dewars in milled Aluminium. The parts were surface coated according to MIL standards. The Trays and Box Modules for the Dewars were manufactured from a combination of milled and bend aluminium plates. Vial Cards, Bottle Holders and Contacts Cards were made from aluminium with Hi-Air Velcro and Nomex sewn on for handles and attachments.

A series of tools and OSE tool bags were also delivered with the internal outfitting. This covered a range of tools and gloves for de-icing and operations of the freezer. The soft items were manufactured in space approved Nomex fabric and Velcro.

Furthermore Damec supported the prime contractor Astrium on aspects of the operation and utilization of the freezer. This included among other inputs for operations manuals, support to crew reviews in Europe and US, and planning and implementation of the NASA IMS barcode label system on all the freezer parts.

In total NASA launched three flight models of the MELFI-freezers, including the Damec hardware, to the International Space Station between 2005 and 2010, where they are still operating today.