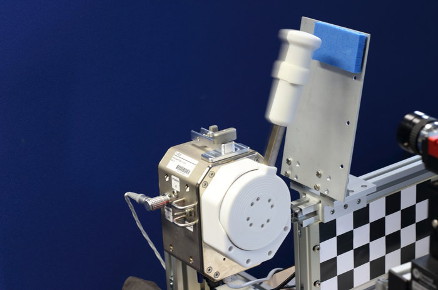 Haptics-2 is the second of a series of in-flight experiments to demonstrate advanced teleoperation.

The experiment will make use of the same hardware setup, 1-DOF (1-Degree of Freedom) to teleoperate a similar 1-DOF Setup on Earth, from Space. Two routes are available to send signals back- and forth between the ISS and the test setup at the ESA Telerobotics and Haptics Laboratory. The first route is composed by a signaling system that relays data via a geo-synchronous satellite constellation, the NASA Ku-Fwd system.

The second is a low-latency direct S-band link provided by Russian partners through S-band hardware installed on the Russian module of the ISS. The signal is then received by a German groundstation of the DLR (German Aerospace Agency). While the later link is direct and features little transmission delay it has only very limited bandwidth. The first link, enables large bandwidth, but also requires much longer signal travelling times.

During Haptics-2 a hand-shake from Space to ground, control of a video camera and remote stiffness discrimination test will be performed. The last crew will have to probe objects of varying stiffness remotely from space and rate their relative stiffnesses.