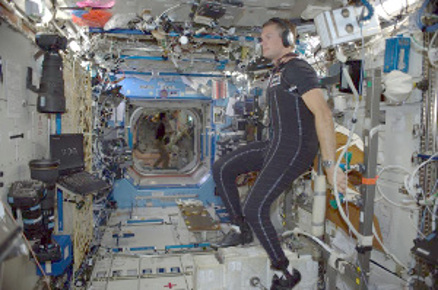 Danish Aerospace Company (DAC) has monitored and supported ESA-astronaut Andreas Mogensen’s activities on the Space Station ISS from its control room in Odense. Andreas is and has been very busy managing all his experiments and is doing a great job.

DAC’s staff monitor every day Andreas Mogensen’s activities and is supported the six experi-ments DAC is responsible for conducting in space for ESA.

Saturday, Andreas completed DAC’s AquaMembrane experiment. Sunday and Monday, Andreas rode the CEVIS bicycle ergometer during the MobileHR-experiment. Monday afternoon Andreas was supported by DAC during Interact by remote controlling a robot in The Netherlands. Wednesday DAC’s staff in the control room supervised Andreas during a series of ultrasound scans of the calf muscles in connection with MARES muscle experimental equipment. DAC is continuously downloading questionaire forms from ISS filled in by Andreas about the Space Headache experiment.

“Andreas Mogensen is working very hard during his stay at the ISS. From looking at him floating into the space station last Friday, it is obvious that he has adjusted to being weightless very fast. We have monitored him and continue doing so very closely from our control room in Odense. You cannot tell by watching him that this is his first trip to space. He works like an experienced astronaut and is doing a terrific job. Even though ESA has rescheduled the space trip by squeezing 10 workdays into 8 workdays with the same amount of work - which is very ambitious – he has succeeded by keeping up with his work as-signments every day.

We have the deepest respect for Andreas and are filled with admiration by the fantastic work he is preforming out there in orbit around the Earth.” - says Thomas A. E. Andersen, CEO of Danish Aerospace.

Since 2004, DAC has supported medical and other experiments on the ISS for both ESA and NASA

This is how it went:

AquaMembrane:
For six hours during Saturday, Andreas did test the Aquaporin Space Alliance ApS, Aquaporin Inside™ water filtration membrane in space for the first time. DAC is now waiting for the samples to be returned to Earth later in the autumn by an unmanned supply spacecraft for analysis.

Interact:
This is a Dutch/German high-tech technology experiment aimed at demonstrating the feasibility of intuitive robotic remote control over heavily delayed and variable delayed communication channels. The experiment was completed Monday with great success. Andre-as was remote controlling a robot in The Netherlands, who placed an object on Earth with the precision of only 150 micrometer.

EPO iriss:
DAC supports ESA’s educational activities with Andreas Mogensen. He completed a demonstration experiment Sunday, which was selected in a competition among school pupils in Denmark. Later this week he will produce a series of video recordings from ISS cupola – an observatory module with several windows.

Mares Ultrasound:
Mares is ESA’s muscle research laboratory on the Space Station. Legs and muscles functions can be examined in space by using this advanced chair. During three days of testing of Mares, DAC has Wednesday as part of the experiment helped Andreas with a series of ultrasound scans of his calf muscle.

Andreas Mogensen is scheduled to return to Earth the night between Friday and Saturday in the Soyus-TMA16M spacecraft together with the Russian captain Gennady Padalka and the Kazak astronaut Aydyn Aimbetov and will be landing on the plains of Kazakhstan.