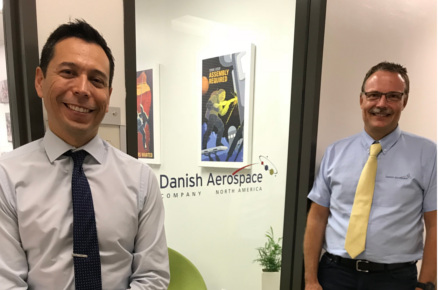 DAC is Friday opening its new subsidiary: Danish Aerospace Company – North America (DAC-NA) in Houston just outside of NASAs Johnson Space Center. The move is a part of DACs strategy to serve the commercial human spaceflight market which has emerged and is expanding rapidly.

Danish Aerospace Company is expanding its presence into North America with the establishment of a U.S. subsidiary in Houston, Texas. Houston is an obvious choice as it represents an integral part of NASAs human spaceflight programs, and serves as a home to several private US space companies that are playing a key role in guiding the future of commercial spaceflight programs.

“Establishing Danish Aerospace Company - North America, Inc. is an initiative we’ve been preparing and looking forward to for quite some time. With, DAC-NA, we hope to play an even more active role in supporting NASA’s human space exploration program and contributing to a variety of U.S. commercial space, human health, and extreme environments by building on three decades of space experience with respect to respiratory and countermeasure equipment, wearable technology for measuring human health and performance, and water processing technology”, -says Thomas A. E. Andersen, CEO of Danish Aerospace Company ApS in Denmark and President of the Board of Directors for the new subsidiary.

David Zuniga has been selected to serve as General Manager for DAC-NA, Inc. in order to lead the new firm. Mr. Zuniga has an extensive commercial and government space program experience most recently with the Center for the Advancement of Science in Space (CASIS) which manages the U.S. National Laboratory on the International Space Station for NASA.

Under Mr. Zuniga DAC-NA will be pursuing three vertical markets which leverage DACs core business areas: wearable technology for measuring human health and performance, human performance (countermeasures), and water recycling for extreme environments in both space and earth based applications.

“I’m ecstatic about the chance to help build DAC-NA, move their technology into the U.S. commercial space market, and explore other core strengths within the organization in order to grow the footprint in the U.S. I see a tremendous potential for the new firm, both within the space sector, and other corresponding fields.”, - says David Zuniga, General Manager of DAC-NA.

DAC-NA plans to begin growth in Houston as it sees their technology fitting directly into human spaceflight, energy, and medicine areas – core competencies within the Houston economy.